On 4th December, Year 1 had a special visitor come in and speak with them. Arthur Meadows, who is Mr. Robinson’s uncle, attended Barlows Primary School during the 1940’s, when it was known as the ’Tin School’. He spoke with the children about what life was like at the school during the time of the 2nd World War and being a teenager during the 1950’s.

The children had lots of great questions for Arthur and they were amazed to hear that mobile phones, computer tablets and Playstations did not exist back then! In fact, entertainment came in the form of listening to the radio!

Arthur shared some photographs from his youth, showing how milk was delivered to the school by a lady on a horse and cart. He also showed how the children came to school in their own clothes and did not have to wear a school uniform. There was some enthusiasm from the Year 1 children about this!

The children enjoyed being able to speak with someone who grew up during the 1950’s which helped to bring their topic to life. 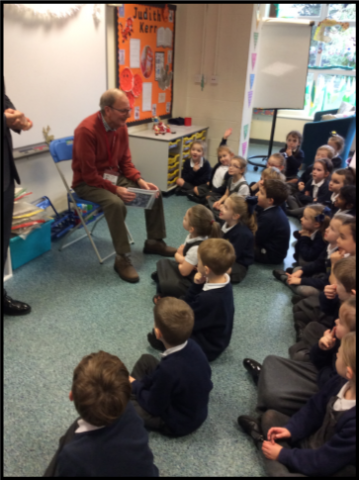